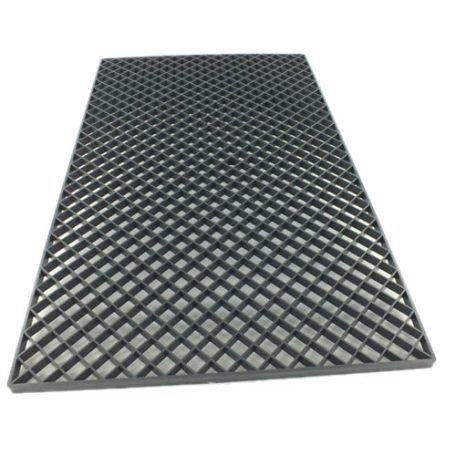 A most useful aid for anyone building their own filtration system these can be placed at a level that provides a void of water underneath the media itself and keeps the media out of any debris that may have gathered in the filter.

It supports the media and is quite robust and is a must really can be fixed together and cut to size using simply a fine toothed wood saw or angle grinder. Plastic media, for use in biological pond filters – specifically in moving bed bio reactors, was pioneered by Evolution Aqua, some 20 years ago. In recent years, other plastic media have come onto the market, usually with the aim of trying to get more and more surface area. However, one drawback to using plastic media has always been the time it takes to establish a stable biofilm – essential for good filtration.

After many years of research, Evolution Aqua have now developed a new media that not only gives class leading surface area, but also overcomes the problem of long maturation times.

K+ Sinking Filter Media is designed and manufactured in the UK by Evolution Aqua. This advanced media, with its innovative design, and class leading surface area provides enhanced biological and mechanical filtration.

As Evolution Aqua extrude K+ Media, Minerals and Enzymes are added to the raw material. The result of this process, unique to Evolution Aqua, is a filtration media that not only out performs most of it’s competitors due to its large protected surface area, but also answers the problem of how to speed up the time taken to mature your filter.

During the extrusion process, Evolution Aqua add a range of minerals, along with magnesium, calcium, enzymes and salt to the raw material that is used to manufacture K+Media. The result means that K+Media will mature much faster than many other types of media.

The shape of K+ Sinking Filter Media optimises the amount of “quiet zones” within the media where a stable bio-film can develop. Whilst K+Media keeps the integral profile of K1 Media at its core, there is an extra layer of cells and fins around the outside of each piece that enable microscopic organisms such as Rotifers and Vorticella to thrive. This is an additional benefit as competitor media do not have such “quiet zones” that would allow these higher lifeforms of filter feeders to develop. The bacteria and organisms that form within the bio-film ensure the media delivers optimum levels of biological filtration in the moving bed, which has been proven filtration technology for many years in the fishkeeping hobby.

Evolution Aqua also recommend using K+ Media in combination with the PURE Pond and PURE+ Filter Start Gel to boost bacteria levels which in turn will stick to the media and speed up the maturation process even more. 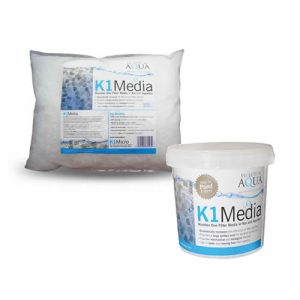 Kaldnes Moving Bed process, which has been scientifically tried and tested in fish farming and waste water treatment for over 10 years, is now available for fish keepers and is exclusively distributed worldwide by Evolution Aqua. The media is engineered in a wheel shape and is slightly positively bouyant. This allows a small amount of water flow to circulate the media throughout the vessel. This flow is created with your air pump and air stones or diffuser etc.

How it works : Maturing the Kaldnes bio-media is important because a delicate eco-system is naturally developing for the bacteria involved in the nitrification process. Kaldnes media provides the maximum active surface area for the bacteria to colonise, more than other types of static media. It is this process which removes harmful ammonia and nitrite from the water.

How it is different to other media : As the Kaldnes media moves within the filter, it causes the old dead bacteria on the outside to be displaced. This makes space for new younger heavier feeding bacteria to rapidly colonise. Within the wheel is a protected surface which enables colonies of bacteria to naturally follow their lifecycle, of maturing, dying and then fueling the latter stages of the nitrification cycle. Kaldnes has been designed to provide the best possible habitat for both young and mature beneficial bacterial colonies.

Incorporating Kaldnes Moving Bed™ Process. Developed by Professor Halvard Odergard at Trondheim University of Science and Technology the Kaldnes Moving Bed™ bio film process has been designed specifically to create the most effective environment for the nitrification process to take place. The media is engineered in a wheel shape and is slightly positively buoyant, allowing a small amount of water flow (created by adding air to the process) to circulate the media throughout the vessel.

Oxygen and food (ammonia and nitrite) gives the bacteria the means to grow, whilst the Kaldnes media provides maximum surface area for the bacteria to colonise and produce bio film. It is this process, which removes harmful ammonia and nitrite from the water. As the Kaldnes media chaotically circulates within the bio tank, it causes old dead bacteria/bio film on the outside, to be removed making space for new younger heavier feeding bacteria/bio films to colonise. Within the wheel, is a protected surface, which enables colonies of bacteria to naturally follow their life cycle, maturing and dying, in turn fuelling the latter stages of the nitrification conversion process. It also assists in the breakdown of any small particles passing through from the mechanical stage. Therefore, the Kaldnes media maintains both a young bio film and a maturing bio film providing a more consistent filter performance, whilst improving water quality, encouraging healthier Koi and aiding in reducing green water and blanket weed.

Due to chaotic movement of the Kaldnes K1 media, the process is self-cleaning and requires no maintenance. This allows the filter to reach optimum effectiveness without the disturbance of periodic maintenance, avoiding unnecessary loss of bacteria within the filter preventing high levels of ammonia and nitrite within the water.

This amazing bio media which is reputed to be 10 times more efficient than matting and lowers Nitrate! 100 litres can process 1/2 kilo of high protein food per day! Designed to be moving at all times, Kaldnes K1 is self cleaning, owing to its continual motion in both water and airflows and is also therefore massively oxygenated thus rendering it super efficient. Kaldnes has also proven to be a fantastic static media to improve mechanical filtration as it does not block, but is capable of removing very fine solids and is very easy to clean 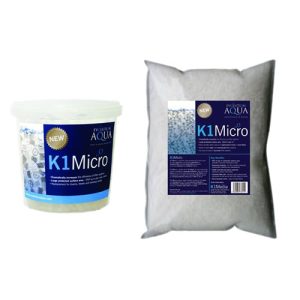 K1 Micro Filter Media is specifically designed for use in bead filters, conventional pond filters and aquarium filters. K1 Micro has the same wheel shaped design as K1 Media, but it has an increased protected surface area of 950 m2 per m3.

The wheel shaped structure of K1 Micro is designed specifically to create the most effective environment for the nitrification process to take place. As K1 Micro media matures, bacteria colonises in the “quiet areas” of each piece of media helping to improve nitrification / de-nitrification. This enables a well-balanced biological equilibrium to be sustained in your pond to keep fish healthy and the water crystal clear.

The small size of K1 Micro makes it ideal to be used a replacement for beads in a bead filter. Not only will the vast 950m2 per m3 protected surface area maintain a bio-film that helps to improve nitrification, water quality and clarity, but K1 Micro can offer many more benefits:

Increased protection for the bio-film. K1 Micro retains the bio-film within its wheel shaped structure.
Improved solids handling. A static bed of K1 Micro packs tightly together with areas for solid particles and fines to be captured, helping to reduce TDS levels.

Increased flow rate.K1 Micro allows enough water to flow evenly through media rather than tracking around a “clump” of beads. This means that flow rates are improved when using “like for like” pumps.

Reduced back pressure. The improved flow also reduces the back pressure or resistance inflicted on the pump. In turn this improves the pumps’ efficiency and may even result in the need for a lower rated pump which will ultimately save you money!

Improved cleaning. During a cleaning process, the bio-film remains protected within the K1 Micro. 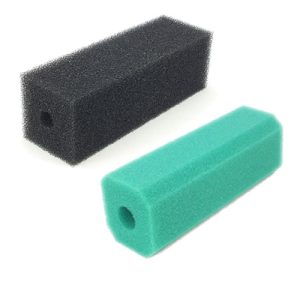 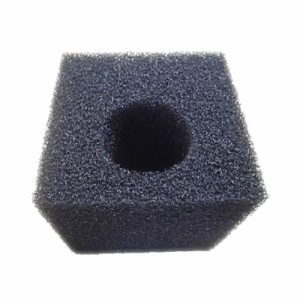 These Foam Cubes are designed to fit over a pump cage to act as a pre-filter and will also extend the maintenance period. 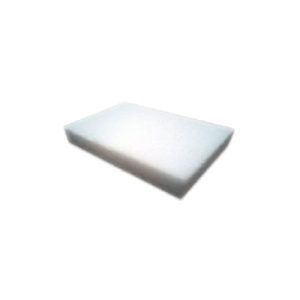 This media is easily cleaned or can be used as a dissposable media removing the necessity for regular cleaning. 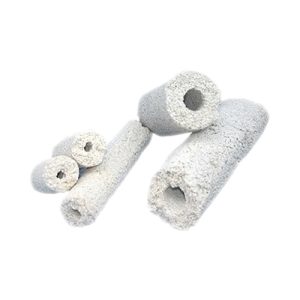 Bacteria Home media is a high-grade filter medium made of porous bars of mineral rock. The rock is baked under very high temperatures. The media is suitable for different types of filter, but is especially effective in a bakki shower.

High concentrations of good bacteria nestle in the microscopic pores in the rock. The bacteria improve the quality of your water and filter out any harmful particles such as nitrate, nitrite, and ammonia.

The media increases the mineral and redox values of the water. It also enriches your pond with oxygen. This way, Bacteria Home media improves the quality of your water up to 16 times more effectively than do other filtration systems. 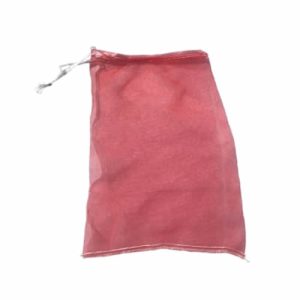 Kusuri Lithaqua is a marine mineral with a high content of minerals, trace elements and carbonates. It brings them into your pond and thereby adjusts the mineral balance and improves the water quality. Use it as pond substrate for bacteria to grow on and for fish to play in, or use it as a filter medium.

Modern multi-chamber filters contain mainly plastic media. Those are excellent supports for bacteria but they do not add anything to water quality. It is important to fill at least one filter chamber (preferably the last chamber) with Kusuri Lithaqua. It provides an enormous surface area for bacteria 10 to 20 times more than most plastic filter media) and provides the bacteria with essential nutrients.

Lithaqua is a marine mineral high in trace elements and carbonates, ideal for raising KH values. A superb filter media of porous construction, allowing a huge surface area for the growth of beneficial bacteria.

Modern filter chambers contain many and varied plastic media, these provide good support – but Lithaqua goes one stage further. Not only do the beneficial bacteria draw on nutrients from the mineral support, the media has a massive surface area up to 20 times greater than most plastic media.

Lithaqua is a biological media not intended for mechanical stages.

Use Lithaqua in a clean water chamber after mechanical removal of waste. Lithaqua is far more efficient than crushed oyster shells, and the high level of carbonates will improve carbonate alkalinity in soft water regions, neutralising low acid pH and buffer swings in pH.