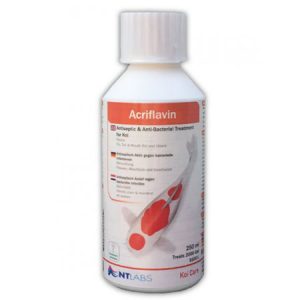 NT Labs Acriflavin is a treatment for bacterial ailments such as fin-rot and ulcers in Koi ponds or quarantine tanks. NT Labs Koi Care Acriflavin is best used in conjunction with NT Labs Ulcer-Swab and Wound Seal in the treatment of ulcers and other open wounds.

All ponds will contain billions of minute bacteria. These include helpful species that breakdown the toxic fish waste in the biological filter system, and convert it into nitrate, which is then taken up by the plants. However, there are also other bacteria that live in the pond that are opportunistic invaders of stressed and wounded fish, including the species Pseudomonas and Aeromonas which will infect any cut or abrasion on the surface of the fish, and can also invade the host across the gut wall during gastro-intestinal problems.

When added to the pond, NT Labs Acriflavin will reduce the numbers of these opportunistic bacteria in the pond, thus lowering not only the chance of infection, but also the intensity of disease in already infected ponds. Acriflavin is ideal to use in hospital or quarantine tanks, but it is unwise to constantly add the treatment to the pond when the fish are healthy. This is because a background level of bacteria is essential for healthy fish to maintain their immune system. 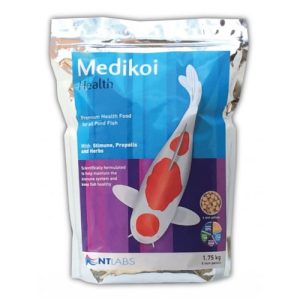 Medikoi Health food is the ideal way to support the immune system of your Koi through the food’s unique ingredients including: lemon peel, olive leaf, Artemesia and Propolis. Another vital ingredient is Stimune, this helps the fish’s natural immune system to fight infection.

Available in the following variations: 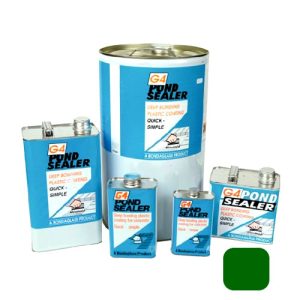 G4 Green Pond Sealer is a moisture cured polyurethane which forms a non-porous seal on concrete rendered ponds, it uses the moisture in the air and the render to harden, G4 Green pond sealer can be applied to slightly damp surfaces, but it is important that the render is sufficiently dry to be porous so as to enable the first coat of G4 pond sealer to bond and obtain a mechanical grip, G4 pond sealer can be applied in poor weather conditions, high humidity and at temperatures down to zero degree’s.

As a general rule the pond should be constructed to be structurally sound since the G4 Green pond sealer only provides the waterproof seal, on no account use a P.V.A based sealer to seal or prime any surfaces, these materials can contain ammonia and also stop the G4 pond sealer from adhering to the render.

Ponds will normally be constructed with either brick, lightweight block or concrete block and then rendered, it is not necessary to add waterproofing agents to the render mix as this will increase the density of the render and can inhibit G4 pond sealer penetration, if a waterproofing agent has been used, simply rub down the surface with an abrasive to obtain a key.

If a fibre is used to give strength to the render it is necessary to burn off or sand down any fibres that are on the surface, as any fibres that protrude will cause leakage, G4 pond sealer will not bond to the fibres.

The cement render should be trowelled to an even surface but not to a smooth dense plaster like finish since this prevents the penetration of G4 pond sealer, new render should be kept damp for the first three days and then allowed to harden for 21-28 days depending on conditions.

We strongly recommend that you mix Black Knight Wizard Fibre or some similar fibre into the render mix. This will help prevent the frost cracking the render in winter and give additional strength to the structure.

Follow the application instructions as detailed for G4 Pond Sealer Clear but the last two coats will be G4 Pond Sealer Colour. G4 Pond Sealer is mechanically hard after 24 hours and workable on some 6 hours after final application. However, 72 hours must elapse for full chemical cure, before washing down the G4 Pond Sealer with copious amounts of clean water. This water should be drained off. The koi Pond can then be filled. Consumption of G4 Pond Sealer will vary slightly according to the porosity of the substrate.

If rain is expected make provision for covering the coated area, since water can damage the G4 pond sealer during the curing process. As soon as it is superficially dry water should not affect G4 pond sealer 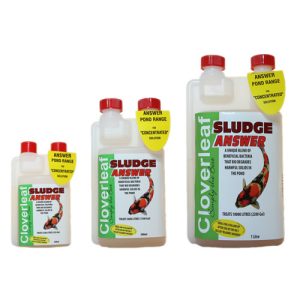 Cloverleaf Sludge Answer is a unique blend of beneficial bacteria used to convert and remove sludge from the pond and filter system.

The accumulation of sludge within a pond or filter system means far more than just an ugly sight, such deposits not only erode important saturated oxygen levels ,but also become a breeding ground for pathogenic bacteria. Using nature’s natural range of bacteria.

Cloverleaf Sludge Answer is the safe way to biologically removing sludge and dead algae thus creating a cleaner pond and less filter maintenance, whilst promoting a sounder environment for the fish to enjoy.

The product should be mixed with 3 litres of pond water, and poured over the pond surface and into the filter system using a watering can.

“Sludge Answer” is the perfect follow up to the no 1 selling “Blanket Answer” to help reduce the residues left after application. 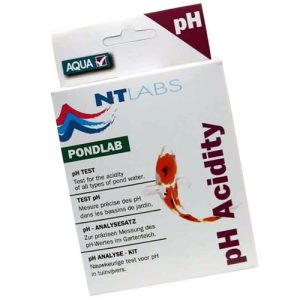 pH is the measure of the acidity or alkalinity of the water in your pond. Pond fish prefer the water to be between 7 and 8, fluctuations outside theses values can cause stress to the fish. 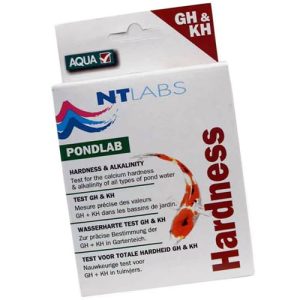 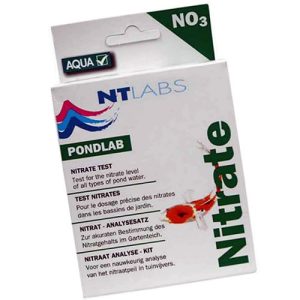 Nitrate is produced by the beneficial bacteria in the pond and filters as they break down the fish’s toxic waste products (Ammonia and Nitrite). Nitrate is not toxic to pond fish.

This process forms the biological filtration system and is called the Nitrogen Cycle. Nitrate itself is relatively non-toxic, and will not cause troubles at low concentrations. However Nitrate can cause problems as the level rises.

Monitor the level of nitrate in your pond using a NT Labs Nitrate Test Kit on a regular basis. When the level becomes too high for your particular system perform a partial water change to lower the nitrate concentration. 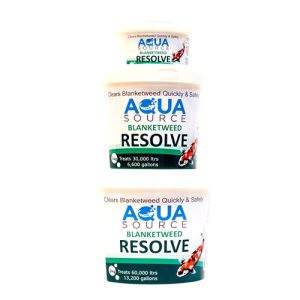 Blanketweed naturally becomes resistant to treatments after continued use and this is why Aqua Source’s new treatment will work when others fail, even at low temperatures.

Aqua Source Blanket Weed Resolve is completely free of Algaecides, ammonium compounds and metal salts. It is harmless to animals and plants and will not affect your filter bacteria. Your pond water may turn slightly cloudy for 3-4 days, but this is perfectly normal. As with all pond treatments, ensure that the pond is well oxygenated. A kH above 2 is recommended, if unsure add some KH buffer. 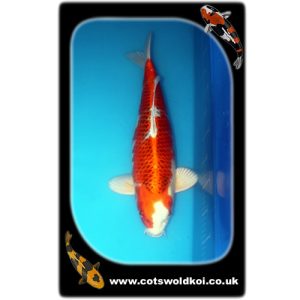 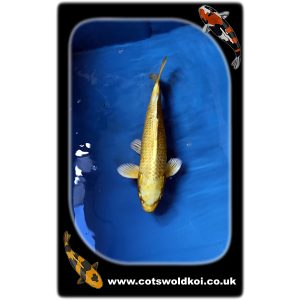